Find this article at:
go.ncsu.edu/readext?316647
— Written By Allison Brown and last updated by Julie Campbell

Mycotoxin in corn continues to be an issue for NC corn producers and NC Extension Corn Specialist Ron Heiniger says they need to be addressed. At a recent field day Heiniger said “There are no good mycotoxins. We want it gone, stomped out, eliminated. It’s just like a weed in a a field. There is no good weed, and the same is true about mycotoxins.”

One of the most concerning mycotoxins in NC is aflatoxin which is caused by ear rot fungi. Aflatoxin is harmful to livestock and humans, and by law corn with high mycotoxin levels cannot be sold.

Fungal infections of the ear occur during pollination. Drought stress results in a lack of synchronization between pollen shed by the tassel and the emergence of the silks from the ear. This increases the chance that pollen will not be viable when it reaches the silk tube. Often the silk tube is longer and less resistant to fungal spores. In addition, kernel sites where pollination has to failed to occur have ideal conditions for harboring and incubating fungal pathogens.

Heiniger says infection through the silk tube is the most common infection that occurs in NC, and causes the biggest problems for farmers. “While the infection occurs during pollination, the key to ear rot damage lies in ideal conditions for growth of the fungal pathogen during the period from corn pollination to physiological maturity,” Heiniger said. “Frequent rainfall events provide the ideal climate of moisture and high humidity needed for fungal growth and reproduction.”

Heiniger said drought damage leads to lack of good shuck coverage which allows rainfall to penetrate the shuck and holds the moisture next to developing kernels. “Once the corn reaches physiological maturity, the kernel is sealed off by the black layer and fungal infections become worse, leading to the production of mycotoxins.”

Growers should scout fields and look for the presence of a gray-green mold in the kernels at the tip or base of the ear or for the presence of a white mold or white starburst pattern in the kernels at the tip of the ear. The presence of either of these symptoms indicates that Aspergillus Flavus or Fusarium moniliform has developed in the field. However this does not necessarily mean that mycotoxins are present. Growers should send a sample to be analyzed for myctoxins. If the test shows there are no mycotoxins found then growers should plan to harvest early to prevent further infection. 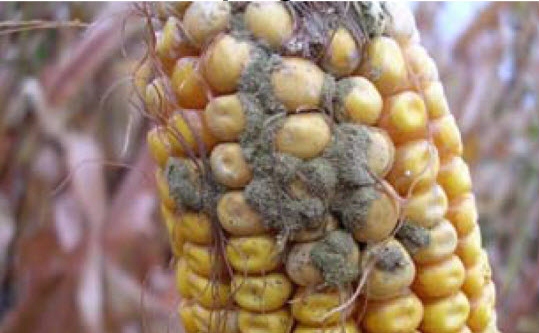 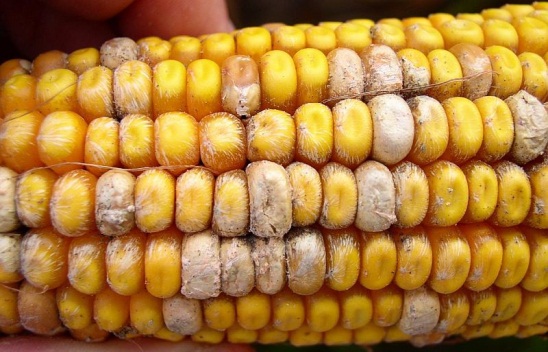